Ok ok, sooo it's been a little more than just awhile since I posted last.. It was Spring time..now it's the end of summer.  As I have been reminded by a the few of you that read my blog, I need to update it. :) So here ya go.  I will be a more diligent blogger now that life has settled down a little bit after surgeries, moving and other random "fun."  This will be a MAJOR catch up post, don't say I didn't warn you :)

First off we are now the happy residents of Austin, Texas y'all! I am in love with it here more than I thought I would be.  Especially since the first time around when we lived here was a living..well, you know what.  I swore I would never move back to Texas...and here we are :) in Texas and very very happy.  The last time we were here I was pregnant with Hayden and sick sick sick.  But Im glad Heavenly Father knows what is best for us more than I do :) I feel very blessed to be here.  I love the people here and the area that we live.  Everything I could possibly want is literally right across the street.  Target, Super Walmart, Children's Place, Carters, multiple shoe stores, clothing stores, lots of shopping period, and lots of restaurants, all which have beyond amazing food...it's great.  There is SOO  much to do in Austin, anything and everything you could possibly want. And if it's not in Austin.  It's in San Antonio which is 45 min away.  Sea World, Six Flags and Schlitterbahn(aka the best water park in the country) are all close by.  We live off a highway, which sounds weird but it's great, because we have a quick and easy access to almost anywhere.  Cory loves his job. Again I feel really blessed that we had such an opportunity to work for such a great company and with such great people.  He works for a pest control company here and helps all the guys that are here selling for the summer. I really do love our new friends we have made here.  They are our little "Texan bug family," that we have adopted.  All the husbands get along almost too well, I love and adore the cute wives here and their sweet kiddos are like my adopted nieces and nephews.  The heat and humidity is not that bad anymore.  I might even..like it a little!  I don't even really notice the humidity.  And I LOVE being outside and feeling the heat.  Which I NEVER thought I would say ever.  Hayden and I love going to the pool with our friends here and going on walks before his bedtime.  I love our ward here.  We have felt so so welcomed.  Cory and I are in the Primary and love it.  I teach the 10 and 11 year olds and Cory teaches the 5 year olds. They definitely keep us on our toes.

Hayden is 19 months as of yesterday!  So crazy!  When I go into get him from his crib after a nap it surprises me sometimes how darn big he is. He is not little anymore.  He is as big or bigger than a lot of 2 year olds. Some fun things going on with Hayden now:
~He is in nursery(which is the greatest thing ever!).
~He is starting to talk a little. He says a few words, and often will randomly say something one time and then doesn't say it for awhile.  But he can sign 15-20+ words.  He is so so smart.  He knows his animals, all this body parts, and actions to so many songs.
~Some of his favorite being "The Wheels on the Bus," and "Itsy Bitsy Spider."
~He LOVES to read.  He could sit and read on his own and especially with me all day long.
~Blue's Clues and Curious George are some of his good buddies :) Hayden loves acting out the songs on Blue's Clues and Curious George is super funny.  Even though he taught him how "awesome" and "fun" it is to unroll all the toilet paper in the bathroom... Thanks George....
~Hayden loves the kids that are here.  He gets so excited when we get to go play with our friends here.  Almost to excited.  Lots of big excited hugs and kisses that the other kiddos don't quite know what to do hahaha.  Cory is pretty sure he is going to marry Addy, one of Amy and Aaron's cute little girls.
~His latest favorite game is to put on daddy's hat, and shoes and grab his keys, phone and shopping cart or back pack and "go to work."  He walks over to me with big huge puckered lips, gives me a hug and a kiss goodbye.  Waves good bye, blows a kiss and walks over to the door.  Fiddles around by the door and then "comes home." :)  He will do this over and over and over.  It's amazing how much they watch and learn from us.
~He climbs EVERYWHERE! On my couches, on the open dishwasher, on chairs, on my tv stand.. *sigh* I turn around for 2 seconds and mass havoc starts.  He is so so busy.  And he definitely knows when he is doing something he shouldn't because when he climbs on top of whatever he shouldn't or is playing in the blinds and he knows I am turning around to look...he stands ridiculously still and covers his eyes.  It's pretty funny, but ohhh so not funny at the same time.
~He has developed an opinion.. and a ridiculously strong one at that.  He knows EXACTLY what he wants to eat for breakfast and will make sure I am 100% clear that he does not want a banana but would like peaches instead.  With this strong opinion comes even bigger badder stronger temper tantrums when he doesn't get what he wants..that boy can throw a really impressive fit.  I am really hoping this stage ends sooner than later.  Let's just say he knows exactly where time out is, and mommy WILL send him there :)

Well, that's a brief run down of what has been going on at the Hamilton house :)  Here are some pictures of some of the adventures at our house and more to come :) promise.  We have been having such a great summer.  I hope everyone else has too!

Pictures from the beginning of the Summer when we were at Grandma Tracy's and Cory was moving us to Texas: 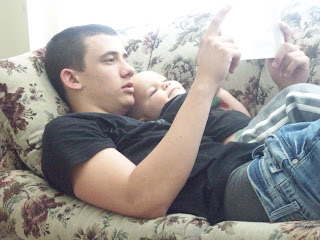 He LOVES Uncle Trav.  And it is the sweetest thing ever to see big, strong Uncle Trav cuddle up and read with him.  We are really going to miss him when he leaves us in TX and goes to Dixie. 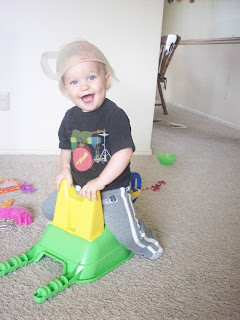 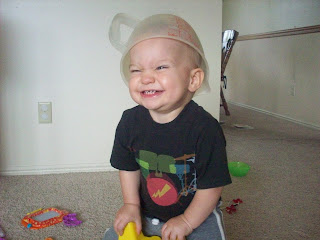 He is so crazy hahaha  I love this picture. 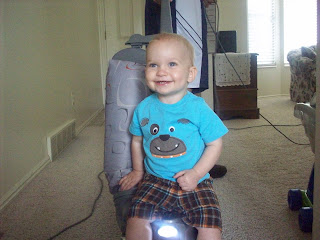 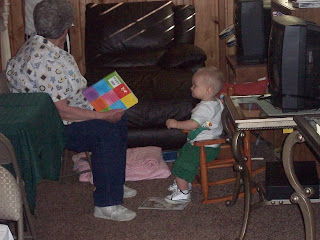 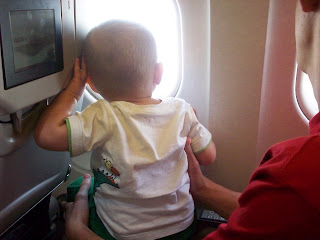 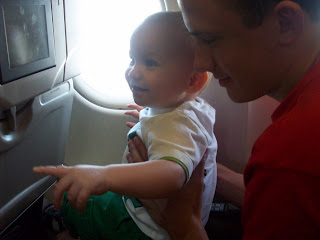 He did so so well on the plane! I was so impressed.  We had a connection which we literally sprinted through the Denver terminal to get on our second plane and Hayden laughed the entire time.  It was like the Amazing Race but in comedy form..Im sure we were a sight to say the least.  The second flight he was so so tired and had peed through his diaper but we were taking off so I had to do a quick pant change during take off(thank goodness I was prepared with extra clothes), and he cried himself to sleep for a few minutes... but it was all pretty smooth.  Hopefully our next few flights will be as smooth!  Especially since I won't have Travis there to help me entertain him. 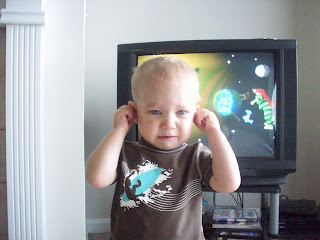 ok so this picture looks so sad...I had just put his ear plugs in for the first time so we could go swimming.  Needless to say, even with Blue's Clues on, he was NOT a fan.  He is so much better now though.  Because ear plugs=swimming! 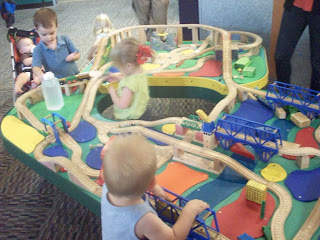 At the Children's Museum in downtown Austin.  It is so so great!  All the kids had a blast! And this is a good picture of all the kids, except little Addy. Annalee has the red flower in her hair, Branden is playing with the trains and Darren is eating. :) 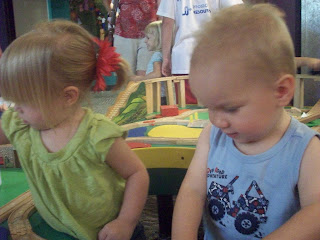 Annalee and Hayden playing with the cars and trains. 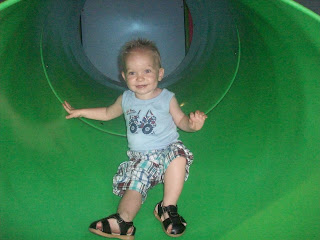 The slide... oh the slide.. I could NOT pull him away from this.  I tried to show him all the other cool things at the museum but he just kept running for the slide.  He went down the slide a million times and cried to leave.. 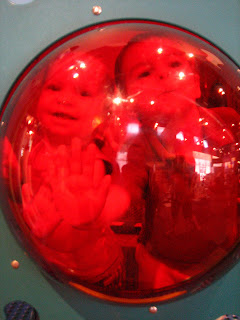 I LOVE this picture of Hayden and Megan's son(another Megan here :) ) Branden.  He is so so cute. 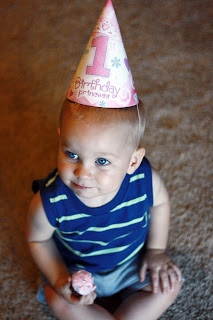 These are cute pictures Megan(not me Megan, friend Megan..confused yet?) took of Hayden at Addy's first birthday party.  It amazes me how big he looks in these pictures. 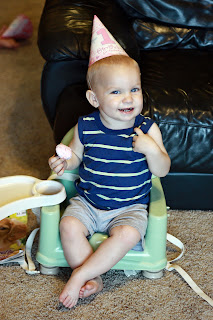 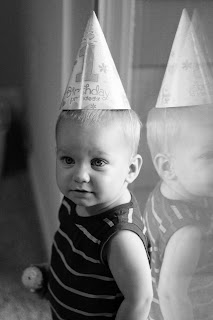 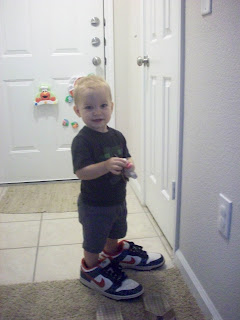 Hayden "going to work" with daddy's shoes and my keys 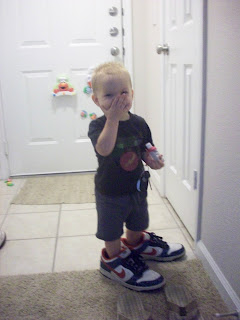 blowing me a kiss good bye 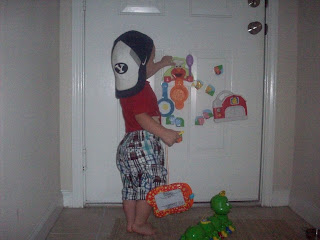 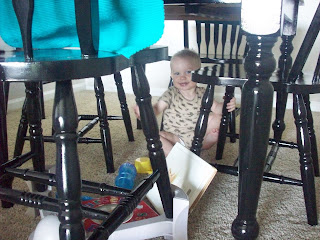 playing under the table 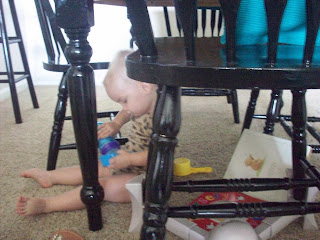 cooking under the table :) 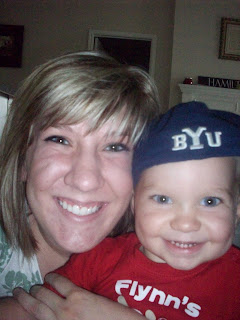 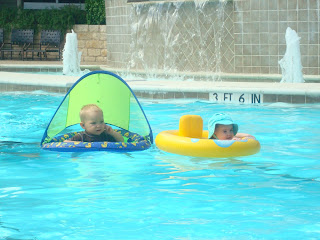 One of the days out in the pool.  That's cute little Addy with him :) We went to my favorite resturant EVER! BJ's...mmm best pizza, best, salad, best dessert EVER...Amy and Aaron and their kids, and Jeff and Megan and their kids came.  This is Hayden trying to show some love to Annalee, who got all embarassed :) so cute. 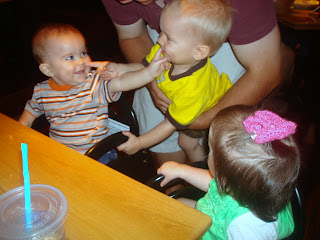 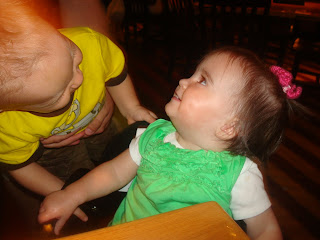 And a BIG hello and a kiss to Addy :)
That's all I will bore you with today.  More picture and summer happenings to come later :)
Posted by Megan at 1:23 PM

Glad to hear that your guys are happy and doing well! Sounds like you guys are having a great summer!!

Yay you posted! I'm glad you're doing so well and love Texas. Hayden is so handsome and smart. Looks like you're having a blast!

Cute pictures Megan!!! I am glad that you guys are liking it so well in Texas... Our little family moves the end of this month to Ohio- So I am getting a little nervous- it's good to hear that you like living away from "home" :)

So cute! I love all the pictures :) It's good to see a post from you!

I'm glad you posted too! It's nice that you are so at home there, and having fun!

So glad you are SO happy! I can't believe how big Hayden is! OMG!

My step brother is TX for more military right now! I wonder how far you are! I look forward to seeing more posts ;) I'm revamping J. Leigh Designz soon but with a new name!