Halli will be 6 months on Saturday. I can't believe it. That whole tiny baby stage went by way too fast. She has been such a blessing to our family. I had no idea that so much sass and fierceness could come from such a tiny person. She is strong willed, knows exactly what she likes, opinionated and acts older than she is.


We all absolutely adore her. Hayden kisses her all.day.long. Ill be holding, feeding, playing, with her and I will hear "kiss kiss," with Hayden pulling on her ankle to give her hugs and kisses. It is the sweetest thing and melts my heart. 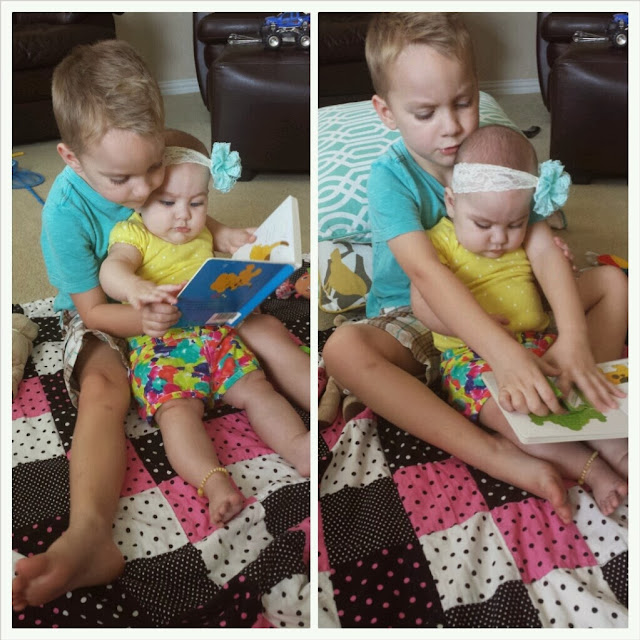 He takes his roll of older brother super seriously. Hayden is the best big brother. I love watching the two of them play together. They are already the best of friends and love each other so much. 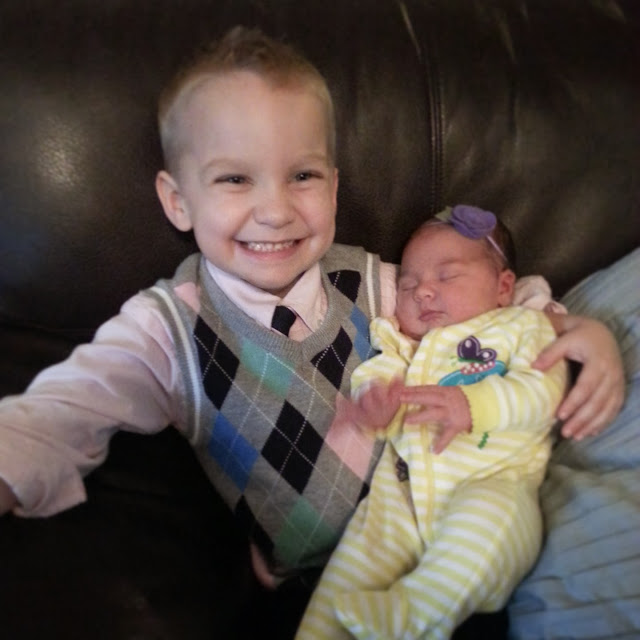 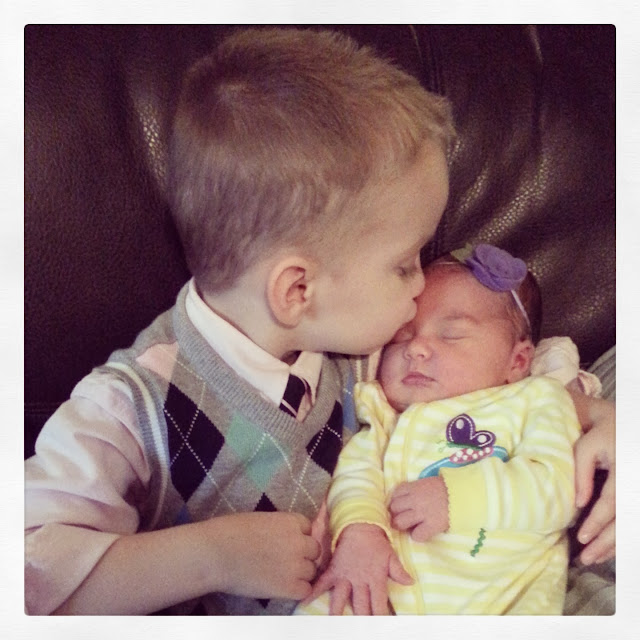 In the hospital I remember staring at Halli's chubby face and just snuggling her. I was and I am quite certain she is the prettiest baby ever. There was a huge feeling of peace and happiness finally having her. I was stunned by all of her dark hair and complexion. She had so much hair! 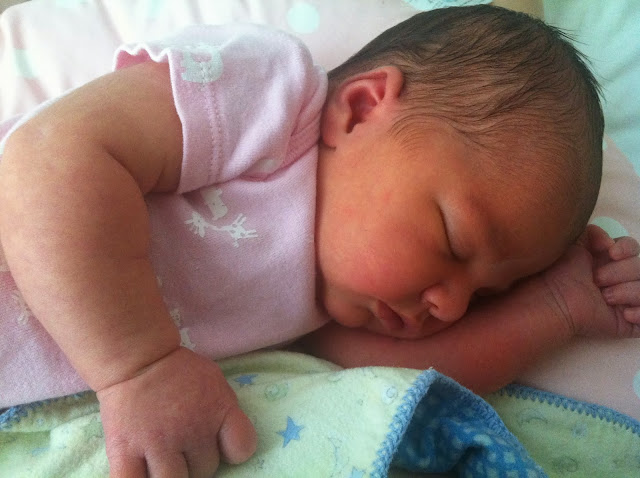 So much hair that some grew on her ears. I was so in love. I never in a million years thought Cory and I would have a baby with such dark features.

My dad and Trav's genes must have snuck in there. She was a gorgeous newborn. I was also surprised how big she was. Hayden was a big baby and I assumed she would have nice chubby cheeks. But 9lbs 8 oz when I still had a week left until my due date...oink girl :)
Also hallelujah for modern medicine and that I could have a c section. She had ZERO intention of ever leaving. We never had visitors at the hospital. I loved it and would have it that way again. It was so special it being just our family.  We waited a long time for her and it was such a sweet experience just sucking up time with our new baby. 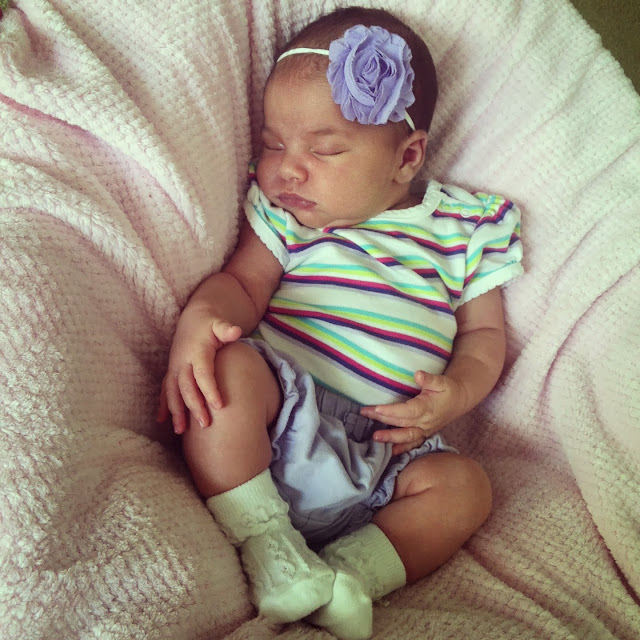 Halli was so grumpy at night in the hospital. She would scream and arch her back.  The nurses and myself all figured it was newborn stuff. Gas. Transition poops. Then during the day she was fine, she nursed great, slept, snuggled on my chest, it was so sweet. So we went home on Easter Sunday. She was a little jaundice but not enough for concern. But that first week home was rough... R.O.U.G.H. I was still healing from my section. Which I healed really well from but it's still major surgery. I had the typical baby blues and cried. A lot. My milk came in that night we got home and I was so engorged I wanted to die. Halli was screaming a solid 12 hrs. Not sleeping or being consoled ever. I cried some more wondering what in the world was going on. Then Hayden started waking up. It was like the two of them tag teamed turns of being awake at night. One night Cory and I just sat in bed laughing because we had just gotten both of them settled. We laid down to sleep and then Halli cried and Hayden had an accident in bed.  We were both so far past exhaustion it was hilarious. I thought I would be more than prepared to have another baby. I had done it before. Hayden was older and I knew he would be a big helper. I knew there would be some adjustments....but I totally under estimated going from one kiddo to two. Especially when number 2 is a way harder baby than her brother was. 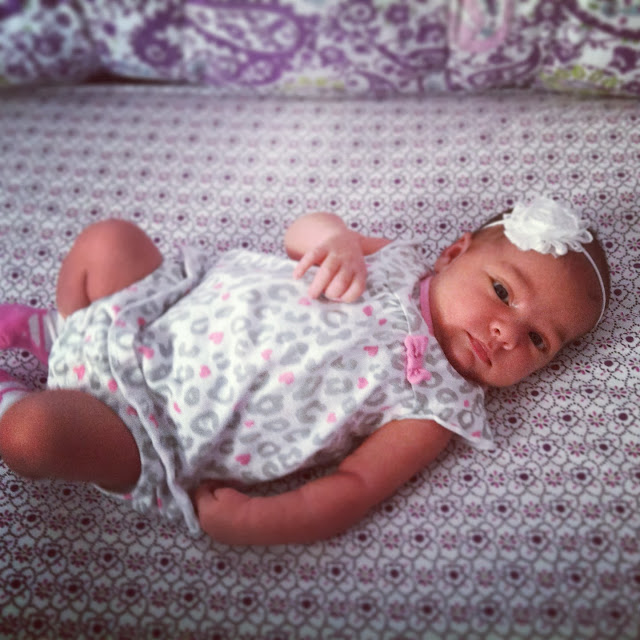 After a week of being home and Halli not just crying anymore....screaming. An awful terrible scream we took her to the ER room at 4am. I'm sure we were a vision. So exhausted. Screaming baby, and wondering what in the world to do. Thankfully she was ok, and was diagnosed with really bad reflux.  We were told to see her pediatrician, and thankfully her pediatrician let us come in right after the hospital.  They gave her basically baby zantac to give her in the morning and at night. Her doctor told us to feed her less more often, incline her bed, and then keep her up right 30 min after eating.  Done, done, and done.  Keeping her upright for 30 min was exhausting but we would have done anything to keep her from screaming that awful in pain cry again.  I'm so grateful Cory is so helpful at night.  He changes diapers and tag teamed keeping her up right with me.  My mom was able to help us as well and would take a shift at night and watch them so I could sleep during the day. 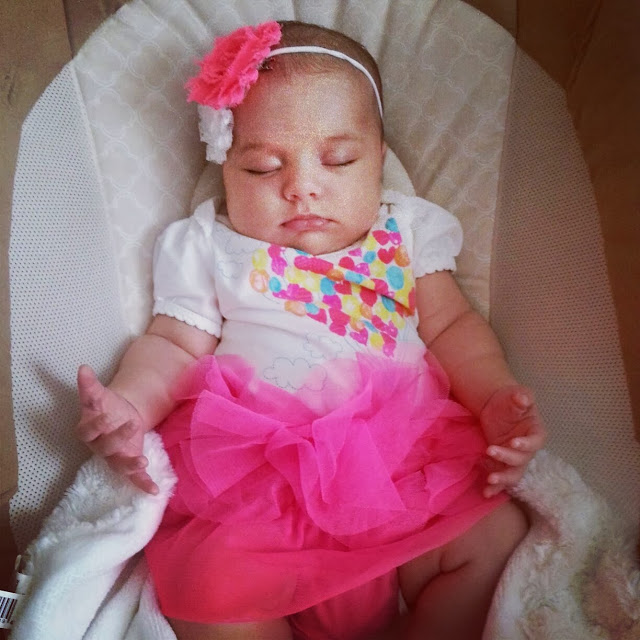 The zantac slowly started helping.  I could still hear everything come up in her throat as she struggled to get it down but it was getting better.  And she wasn't screaming in pain as much. She didn't start sleeping well until about 4 1/2 months.  She wanted to watch everything and would fight sleep hard.  I feel like we have finally gotten into a great routine.  She goes to sleep about 7pm or 7:30 then wakes up once and sleeps until 7am, she gets about 12 hrs of sleep total even with the one wake up.  She usually takes 2 great naps.  It is amazing! We only give her Zantac at night now. 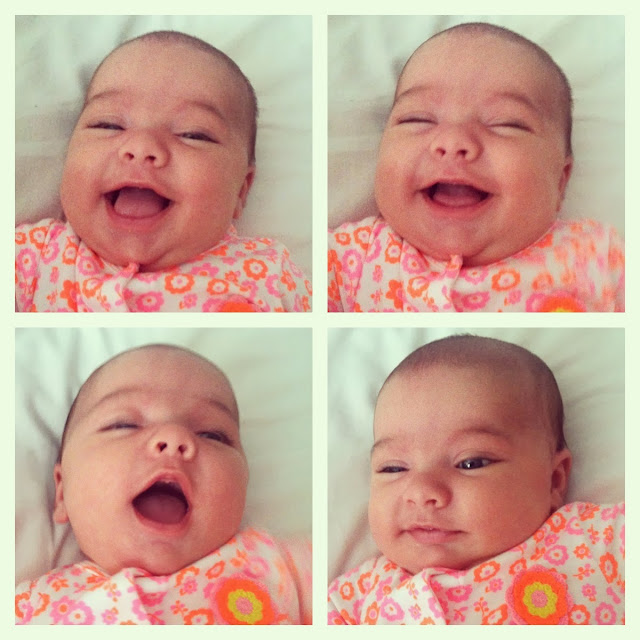 Halli has 2 teeth, her left one came in first then the right 2 days later.  She cut both of them at the same time, no problem.  She was a little more slobbery but I didn't realize she was teething until I actually saw the teeth!

Halli has been rolling all over for months.  She has always been really strong and had great neck and head control.

She is now starting to scoot and army crawl!  I'm not ready!

Now that she Halli is almost 6 months I feel like we really have a  handle on life again.  A new schedule, and routine.  I love having 2 kids. It is harder but so much sweeter. It will be so fun watching them grow up together. I didn't know my heart could love so much.

She is so stubborn, and strong willed.  We love her so much.  She sees what she wants and will roll and scoot and stretch her arm until she gets it.  She likes to be involved with what is going on.  If we are all at the table eating, she has always had to be up at the table watching.  She is a big talker and has the cutest squeal when she gets excited.  Halli is so feisty but also so sweet.

Halli loves:
-Hayden
-Nursing
-Baths
-Playing peek a boo, patty cake, and playing with his piggies.
-Her bunny
-Walks outside
-Talking
-Being on her tummy
-Snuggling on daddy's chest
-Singing, especially Skidamarink

I can't believe Halli will be 6 months on Saturday!  1/2 year gone already.  I'm excited to watch her grow into her little sassy personality.  We are so blessed to have her in our home. 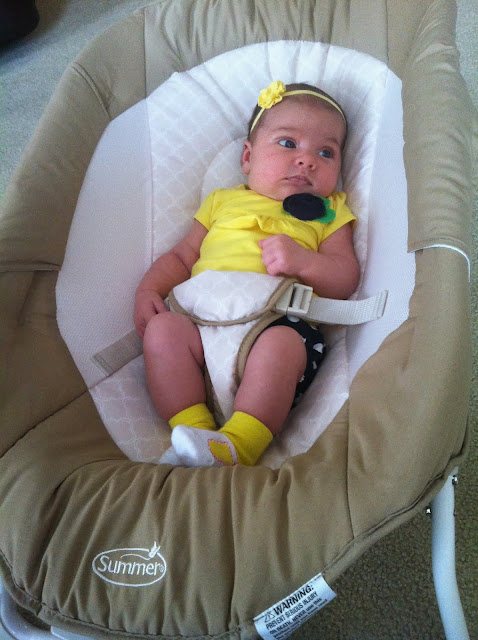 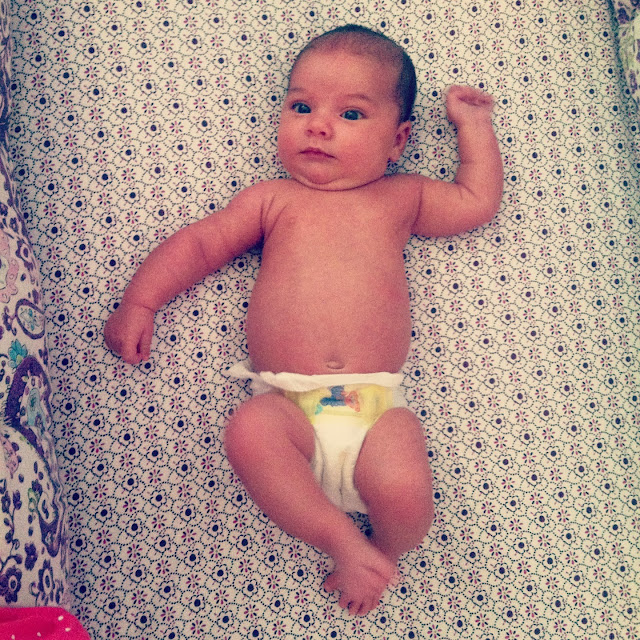 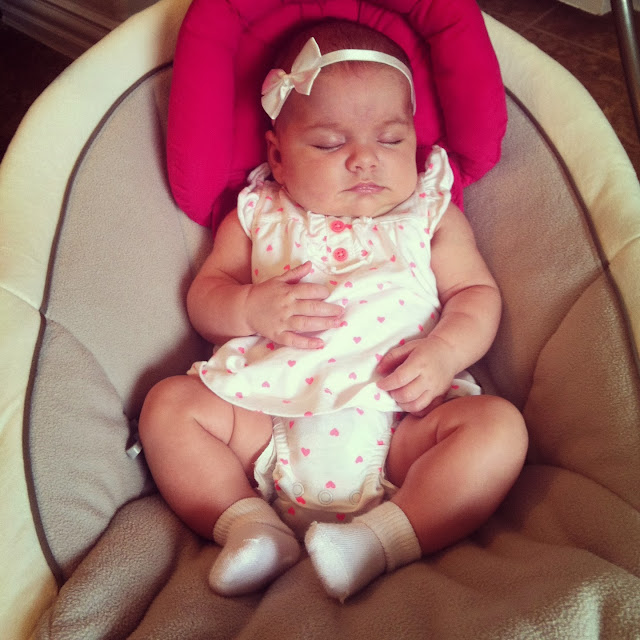 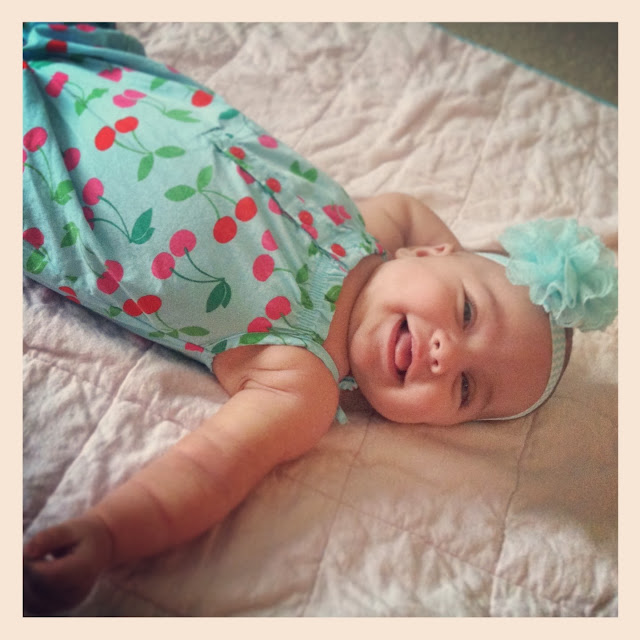 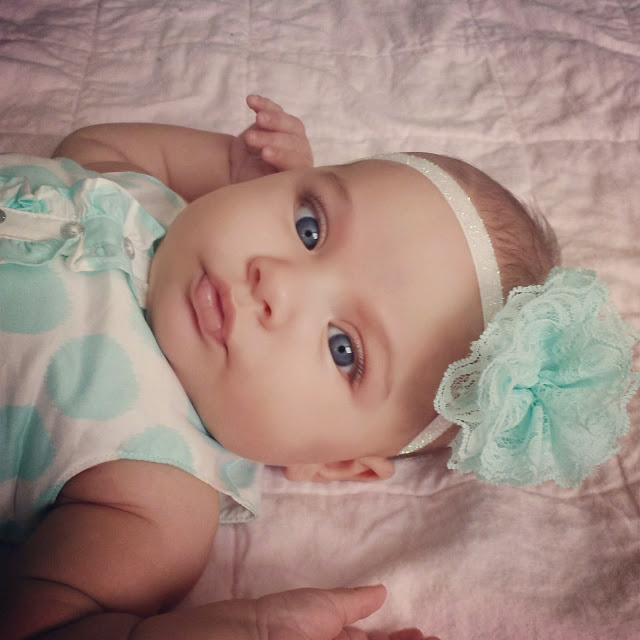 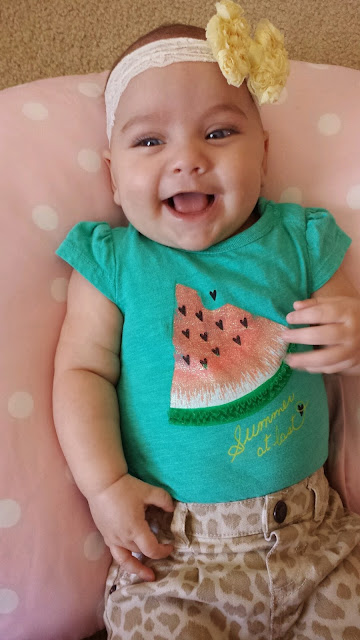 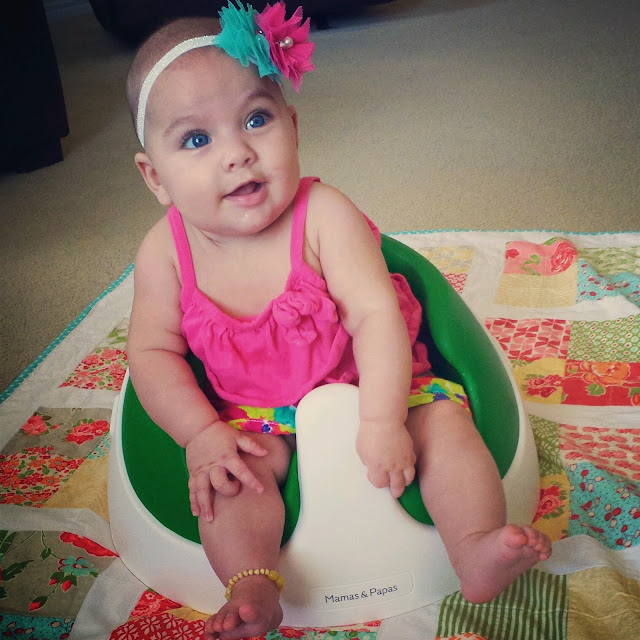 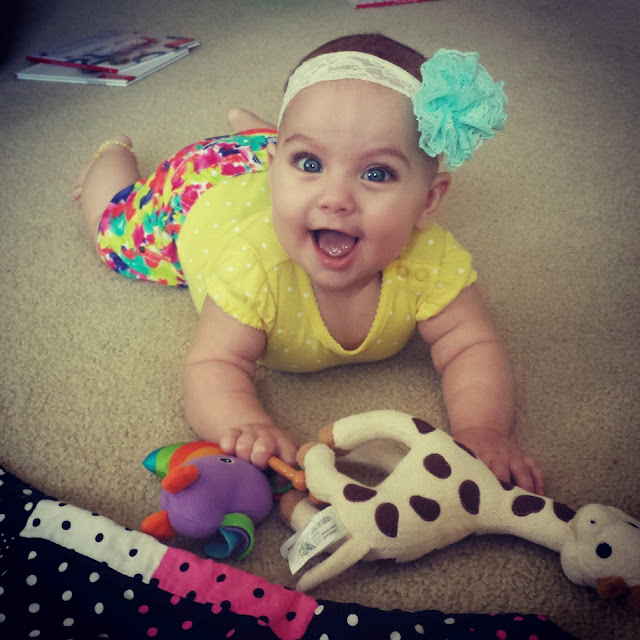 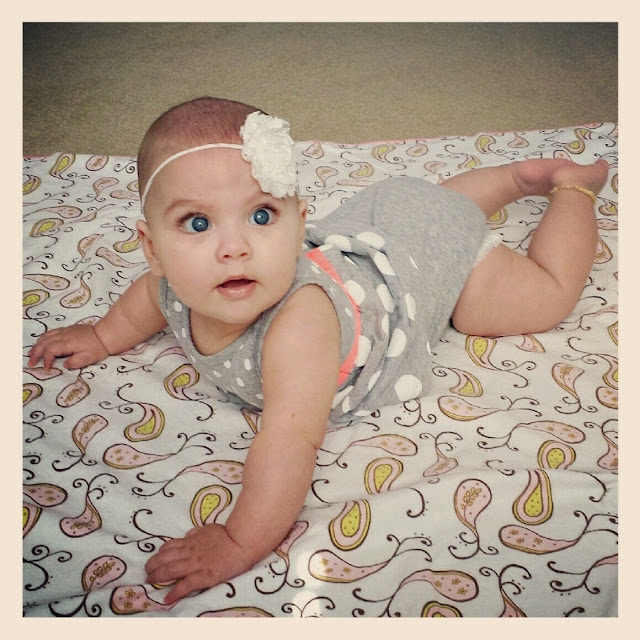 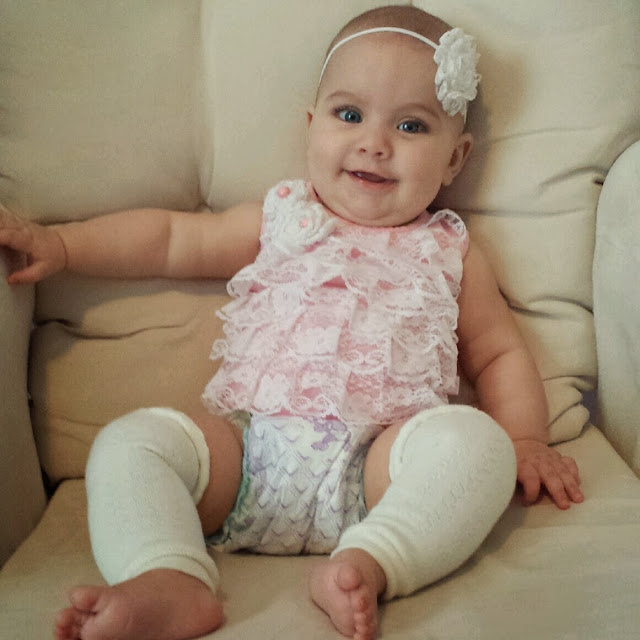 She is so beautiful! It is a huge change going from one kid to two, but it is so fun seeing them interact with each other.