Hayden is so so funny. He dances all. the. time. now. And has added some new moves than just the swaying back and forth. "The head bob," I think is everyone's favorite and he has added what I like to call "the push up."  He will also wave his arms all around in front of him and up high, and he is starting to bounce his bum up and down :) Enjoy. (He bobs his head to everything now...the music from his barn, music on TV, songs I'm singing...all the time. its hilarious.)


Hayden loves dancing to Michael Jackson, Prince, any older ish songs or anything with a good beat... Ive been dancing with him since he was a newborn. I'm determined to make sure he has some sense of beat and rhythm.

This is him just playing, he was rocking out right before I got this though...(this is mostly for our friends and family far far away...)


this is one of Hayden's favorite things to do...he is definitely my big helper.  (the end of this video is my favorite, his big cheese-ola grin cracks me up)


Hayden got his first haircut this past weekend. I'm so pathetic, I totally got all teary and of course kept some of his hair. Its so crazy how much more grown up he looks with his big boy hair cut.  He did so well, he held very still....until about the middle...then he was a little freaked out by this strange girl doing something to his head with these shiny things. At that point he sat with his daddy and he was fine the rest of the time.  He looks so grown up and so handsome.


He was really unsure about the whole thing.. who were these random people, where were we, why mommy had these shiny metal things in her hair, (i got my hair colored and cut too, love it!)
This is him totally giving Morgan the eye, like "don't you come near me..." hahaha
(thanks Morgan for doing his hair!  I love it, and you were so cute with him) 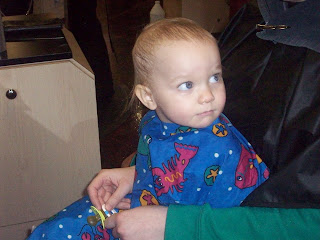 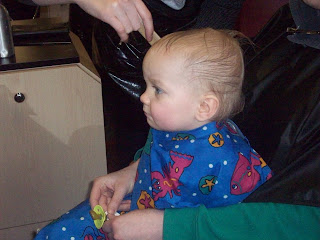 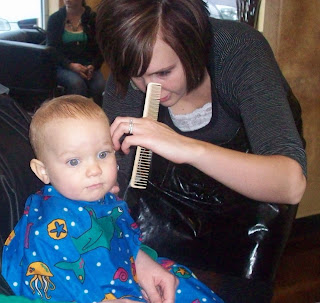 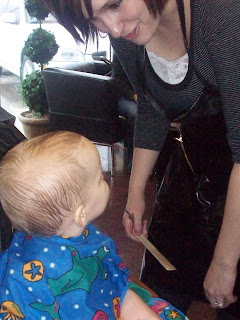 This is my favorite picture EVER!  He was trying so hard to keep it together, and he was almost done but he just couldn't contain himself anymore... 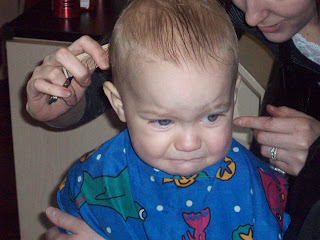 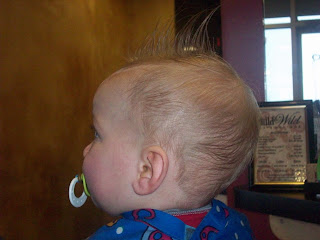 But then he really lost it... 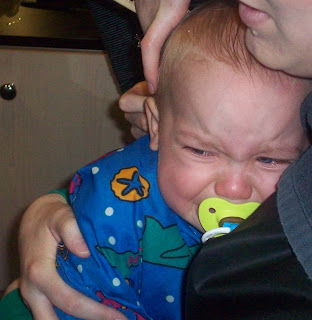 So he sat with Daddy and was . He sat so well the whole time. 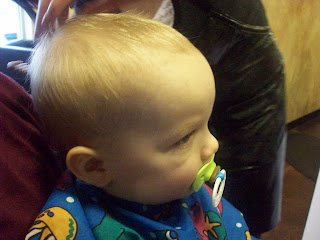 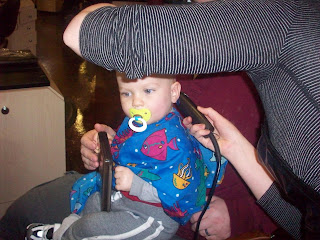 He was such a good boy but soooo done at the end.  He wanted to get the heck out of there.  Thats why the picture is a little blurry.  I think he cried right after this... 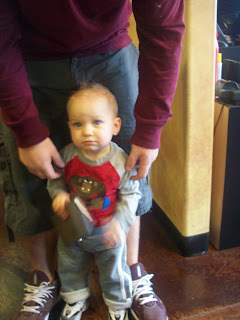 BUT......
look how cute my little man is the next day on Valentine's Day in his cute little V-Day outfit and his new haircut!  love it... he is sooo handsome.  how can you not love him and think he is the cutest ever? 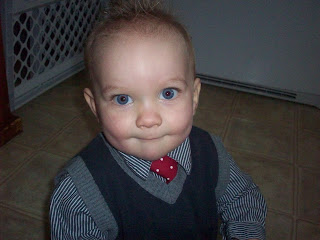 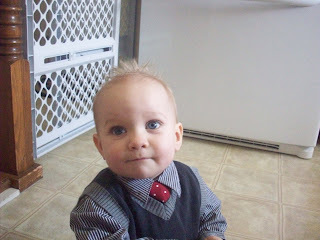 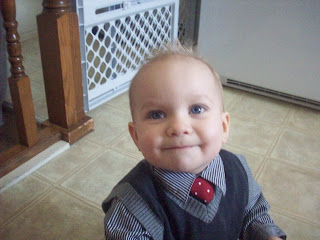 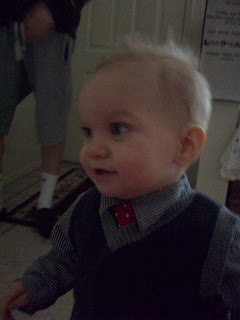 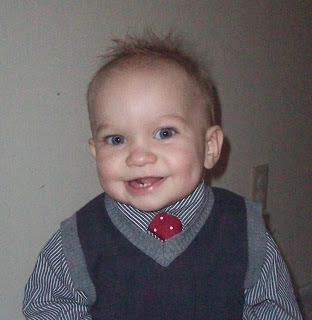 This has probably been waaaay to much documentation and pictures of one child. But what can I say? Im a proud mommy and he is sooo cute. :)

I hope everyone is thinking warm, bright, Spring-ish thoughts! I miss the sun!
Posted by Megan at 10:29 PM

He is SO handsome!! Oh I just want to squeeze him! Parker used to scream every time he go his hair cut! He is SO good now though, just sits there like a good boy :) Payson however, that boy is the screamer now! :)

I totally saved his hair! :)

He is seriously SuCH a cute boy. Love the dancing, thats so fun! And of course you had to save some hair, what mom doesn't??

How cute is Hayden dancing around?! I love it! I knew someone whose kid loved to vacuum too and they bought him a dirt devil vacuum that was kid size and actually worked. I thought it was the funniest thing. Hey, that's one less chore you have to worry about! ;-)

I love his cute little outfit! Where did you get it? I have a hard time finding cute ones for toddlers. Ben loves getting his hair cut. I think the sound of the clippers is soothing to him because I do hair and that's what he listened to for 9 months in my belly. I love Hayden's new 'do. A.D.O.R.A.B.L.E!

AAAwwww! I love the haircut tears!