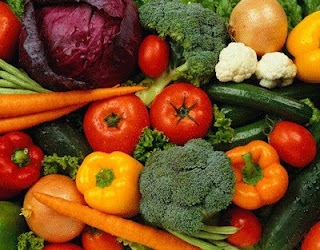 thats right....vegetables.  Hayden's unsworn enemy.... I try and be a good mom.  I try and give him a fruit and vegetable at every meal.  Hayden loves fruit, all fruit.  Oranges, bananas, peaches, pears, etc... and he loves any carb, pasta, rice, etc.  and he has a serious LOVE of cheese.  So much so that we cant say the word cheese without him running to the fridge and him signing please over and over til he gets some cheese....so if you come over, don't say cheese unless you mean to share some with him.
BUT...VEGGIES.  They are a no go.
Not always though. There are some random days that he will chose to eat a green bean.... The only thing I have gotten him to consistently eat is beans.  Like black beans.... And he is will usually eat them better if I put them on a fork?? I have no idea why they apparently taste different on a fork.

BUT, as soon as I turn my back... this happens: 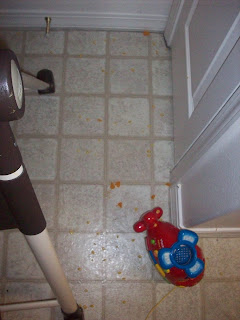 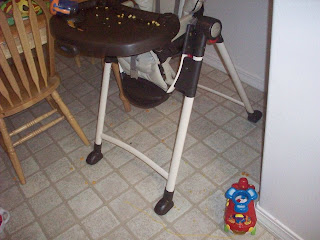 Corn and carrots EVERYWHERE!!!  He quickly goes to clear his tray of anything that looks slightly vegetable.  His poor helicopter, unsuspectingly bombed.... The pictures don't do justice of how much food and corn and carrots he had thrown on the floor.  It was everywhere, in, around, behind...EVERYWHERE on...

My. Newly. Vacuumed. And. Mopped. Clean. Floor.
This is almost a daily occurance now.  I have tried being stern and giving him a time out when he throws food on the floor, I have tried making him clean it up, I have tried a combination of things... I dont know if he thinks if they aren't on his tray he doesn't have to eat them...because today I caught him stuffing a bean into the catcher part of his bib...nice Hayd..nice...very sneaky.  Little do kids know that as soon as your a mom you have eyes everywhere!  And sometimes he just throws food or swings his arms super fast on his tray clearing the food to be funny... he screams and laughs hysterically.  And then I cant help but laugh at how much fun he is having...its a nasty cycle.
I have tried just giving veggies first and sometimes it works and sometimes it doesnt.  I dont know what to do with him.  I am paranoid about what he eats.  I want him to get the things and nutrients he needs to grow and develop big and strong....but he won't eat his veggies.  He LOVED all the veggies pureed in baby food.  But not table food form.
He loves cheese so much Ive considered melting cheese over all his veggies.  Disgusting? Maybe...But what the heck do I do to get him to eat them?
HELP! Did anyone else's kids do this? My game plan for now is just to keep giving them to him.  Loading a fork with veggies one pea at a time if I have too....Any suggestions please?
How can I stay mad at this face though.... 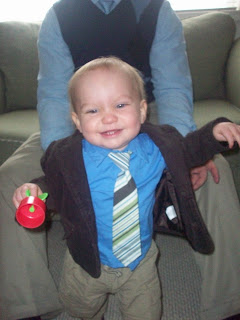 He was soooo handsome this Sunday.  He looked like such a little man.  He was not having the picture taking though.  Right after this picture he threw a total fit...weird he didn't want to sit still some more after having to be quiet through all of church. But I HAD to get some pictures.  So thats why these pictures look like they are all over the place, because Hayden was all over the place :) 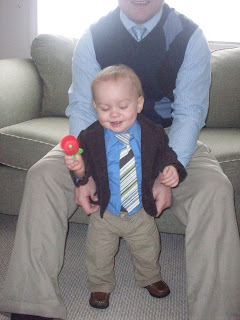 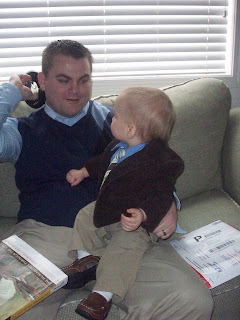 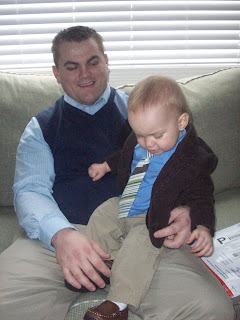 My soul is filled with horror for the future and struggles with vegetables... Good luck sweet momma!

Love the pics of Hayden- he has such a cute smile!

My Payson does not eat veggies either. He really hates them. Parker loves them. It is SO weird..kids can be so different. However, the only time Payson has eaten veggies was when I made this stuff called Voila! Three cheese chicken. It has tonz of veggies in it, and Payson LOVES it!! It was weird to see him eat it.

Nixon is the same way. About the only thing I can get him to eat is green beans and he'll eat a whole can on his own. Sometimes I trick him and put a bite of veggies on a fork, then applesauce on top of them or some other fruit in front of them. Gross I know. But sometimes it works!

Check out the cookbook Deceptivly Delicious by Jessica Seinfeld. (Yes, Jerry's wife). Some of the things in there are too weird for me, but it has some fantastic ideas. Like mac and CHEESE made from scratch (quick, though) with pureed (I think I spelled that wrong) cauliflower or squash or carrots. Basically, you buy a bunch of fresh veggies, cook them to death, toss them in the food processor for a minute and separate into serving sizes--I think I used the ziploc snack bags and did 1/2 cup servings in each and froze them--and then you just throw them into whatever you cook. Since they are basically liquified, kids don't know they're in there. It's great for us, since veggie-eating is often a struggle at our house. Know that you're not alone! :) Good luck!

Oh dear!! When he grows up he'll probably LOVE them! Haha