This winter has been very busy and definitely a transition.  Here in Rexburg, Idaho it is FREEEZING cold.  I thought I knew what cold was but apparently I had no idea.  It is honestly, freeze your butt off cold here.  The first week we were here, I went grocery shopping and it was -9!!  ya, N.E.G.A.T.I.V.E.... and then another morning Cory went to work it was -13! and it was 9am!  Thankfully it has warmed up a bit and today we are a whopping 28 degrees, and its snowing.  It's always warmer when it snows.Rexburg doesn't really have a snow removal system(which just baffles me) so the roads are awful when its snowy and freezing...I have become a great snow driver :)

Winter also means, runny noses, sneezes, colds, coughs and at our house ear infections. lots and lots.  Poor Hayden has had 3 in two months.  About 6 doctors appointments later, one super crappy doctor, lots of antibiotics, one of which Hayden is allergic to(Penicillin), me stressing out about his hearing and having speech delays...we finally went to an ENT here in Rexburg. His ears looked good while we were there and there was no fluid on his ears while we were there and his hearing was great. Whew... BUT when kids have ear infections they have 30% hearing loss!  So Hayden could have been struggling to hear us, or we sounded like he was underwater while he had all the infections.  We then scheduled an appointment to have tubes put in his ears.  I had 2 sets of tubes as a kid, Ive obviously lived through the surgery.  I know lots and lots of kids that have tubes in their ears.  But the thought of Hayden "going under" and having surgery made me want to barf.

We woke up early that very snowy, cold morning...woke Hayden up and left for the hospital.  I had done all the pre-op the day before so I had signed all the dreaded "your child could....seize, die, etc." awful awful things to sign your name too.  They took us right back and got Hayden in a gown.  He was so happy and good considering he hadn't had breakfast yet(he had to fast for the surgery), and we pulled him out of bed and took him to this weird place he had never been.  We waited, then walked him back with the nurse to a certain point and then I gave him to the nurse to take back for the surgery.(WORSE FEELING EVER! just in case you were curious...)  The nurses later said he was happy and fine with them the whole time, until the mask over his face(uh ya...duh..of course he freaked out...)15-20 min later the Doctor came and told us the surgery went great, he was doing great, he had pus in his ears and was starting another infection so he would be more sore, gave us ear drops and went on his way.  I then heard my baby coming down the hallway SCREAMING crying!  He was so out of it.  He was slobbery and wouldn't open his eyes.  I couldn't get him to calm down.  We were in recovery for 45 min.  He cried the ENTIRE time.  Once he was more with us and out of the anesthetic he was more freaking ticked than anything.  He wanted nothing to do with any of the people there, he didn't want anyone but me and Cory to touch or look at him, he didn't want a drink or a snack... he just cried.  Until we left and got outside the hospital.  Then he stopped.  We got home, he ate and took a nap.  He was kinda more grouchy than usual and still kinda loopy sometimes, but was perfect the next day.  It's been a week later and its the last day of putting the ear drops in(which he HATES..LOATHES entirely really...)  But hopefully this means no more ear infections.

Waiting for the nurses to come take us back.  He looked really cute in the little hospital gown. 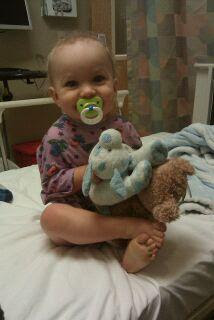 Loving on the cute bear the hospital gave him... and his Dog of course, which he got to take back into surgery with him 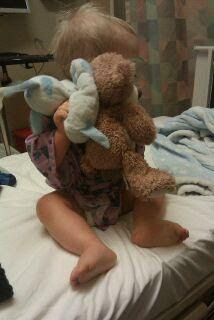 So we survived that fun adventure... Im ready for Spring.....

Here are some other pictures we have randomly taken this winter :)
(side note: Hayden is starting to kinda talk I think.  He will say the same sound over and over for certain words, like for hello and yes.  Im hoping now that he will for sure always have no fluid on his ears he will start talking more.  But he is signing really well.  He knows the signs for, "all done," "please," he signs please for everything...when he wants more, or when he wants up, when he wants out of his crib, when he wants anything really. And today he picked up "thank you," and "cheese."  He eats SOOO much cheese!  And Im glad he has manners already.  He knows where his tummy, nose, ears, head and "button" (belly button) is.  He follows directions, like "go get your ball/milk/juice/puppy etc." If I ask him if he needs to go nigh', night and he is tired he will walk to his crib and reach up for his blanket and dog.  He is so so smart.  He seriously amazes me daily with how much he knows) 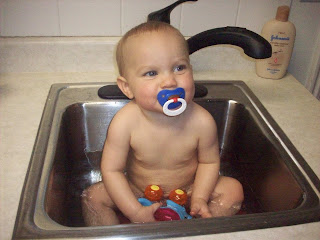 "Taking at my new friends house. Rex :)  We are gonna be good buddies."

(Rex is our friend's brand new baby.  He is SOO cute and little.  It's so crazy to me that Hayden use to be that small) 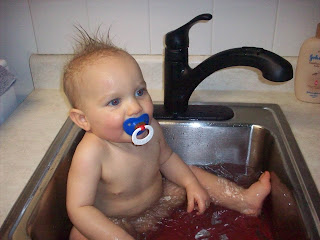 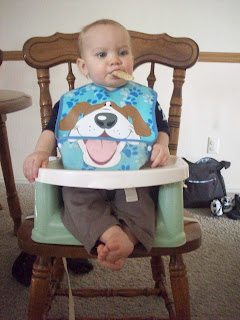 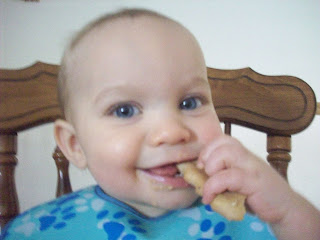 How freaking sweet is this face?  I love watching him sleep... 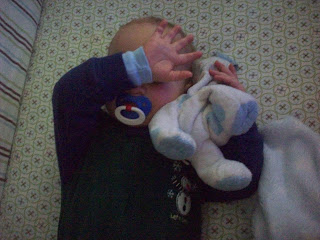 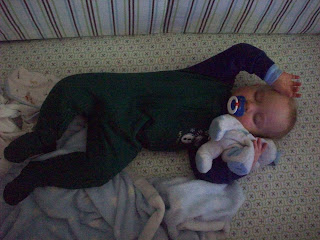 This is the day of his birthday :)

He always surprises me the messes he makes and what I don't think he will be able to reach and then does... like goldish... or... 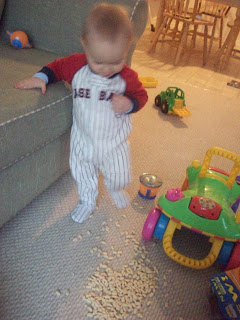 cereal...not sure how he got these... and then dumped them on the floor... 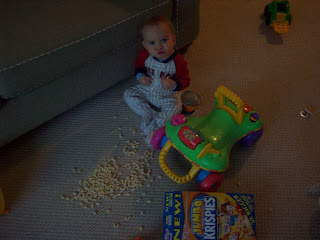 here he is enjoying his handy, and yummy work... 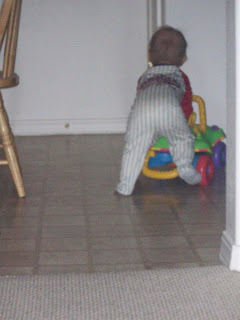 then fleeing the seen of the crime, haha :) 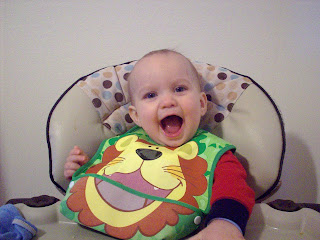 oh my heck he is the cutest 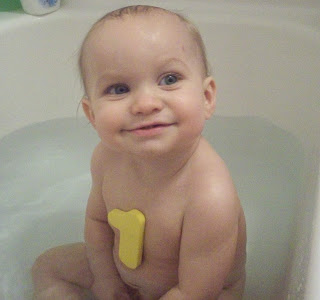 (You will notice a blog button on the top right----------------> over there :) its my new "Believe in Pink" blog.  Im pretty excited about it.  It will be fun for me to be creative and ramble on about things I am passionate about and what I think about really whatever :) Enjoy!  Feel free to email me ideas of what you want to talk about, if you have ideas, crafts or recipes....Or just to vent and talk. Let others know about it and spread the word, grab a button!  My email and all the info is over on that blog so I will see ya there :) )

Cute post, love the pics! Such a handsome guy! PS- how'd you do the new super cute font on your blog?! I adore it!

poor little Hayden! and poor you! I can't imagine how you must have felt sending him back for his tubes surgery. Hopefully they help and he'll have no more infections! So cute about him signing everything too! Sophie just learned how to say please and she says it about EVERYTHING too, and gets seriously so mad when she doesn't get what she wants...she thinks it means she automatically gets it just cause she says please. anyway, cute pictures, he is a darling little guy!

I'm so glad the surgery went well! I hope that those darn ear infections are gone for good!

Aw how awful! The poor guy, I hope that was the last of them! I don't blame him for being ticked off in the hospital! Not fun. The only traumatic thing we experienced with Kennedi was when she had to be strapped down to get a chest x-ray while I watched her scream bloody murder from the other room. Anything that has to do with the hospital is hard! Way cute pictures! I'm SO ready for spring too. :)