Hayden has his 4 month check up about a week ago. He was so, so good and happy. Minus the shot part of course, that was very, very sad. He calmed right down after I picked him up but then laying him back down to get his pants on he was a mess! He knows what happens on that table now and he was not gonna have it again! I love Hayden's doctor (Dr. Nye), he always answers my questions and concerns I have and Hayden really likes him too. Here are Hayden's stats :)

I can't believe how big he is getting! He is so strong and thinks he is so grown up. He has to be facing out all the time so he feels involved with everything. He wants to be part of the conversation and has found his voice. I love all the little noises he makes; he can carry on quite the conversation. We get really loud laughs now, they are so cute. He is pretty ticklish. AND... He rolled over yesterday, from tummy to back on his right side!!! I was so excited. And then he rolled over today the other way! He is a rolling machine. I can't believe he will be getting around and getting into EVERYTHING soon! I love this little guy! I am so lucky to be his mom. I love you my handsome boy! 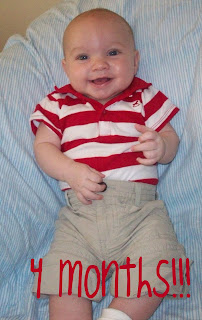 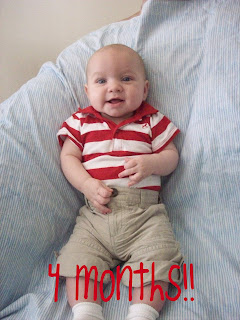 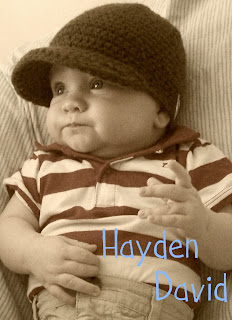 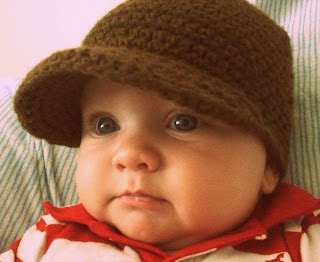 Today's Autism Fact:
I stole this from the Oklahoma Autism Network - The earliest signs of autism are the absence of behaviors that are typically seen in the first year of life and can be easy to miss such as an infant who does not respond to a parent's smile or does not respond as often as other infants. Later signs of autism are the presence of behaviors that are not typical and can include things such as rocking, spinning or unusual use of vision or gaze. These later signs are more observable when the child is around 18-24 months of age or older.
The sometimes subtle symptoms of high functioning autism and Aspergers may not be diagnosed until much later and are often originally diagnosed as ADD/ADHD (Attention Deficit Disorder), Obsessive Compulsive Disorder (OCD), Oppositional Defiant Disorder (ODD), or Anxiety disorder (usually a combination of these).
Posted by Megan at 3:51 PM

He's so adorable! Time flies by so fast.

So that is exciting you may be moving to Idaho... as much as I hate it right now it has been so good for Kam and my relationship because we dont have any friends or family around so we have had to lean allot on each other it has really brought us allot closer to each other! And the people here are so nice and helpful!

It gets lonley sometimes but if you move here you will have family so it will be really good! And It is so the place to save money and get allot for your money for our apartment we are living in right now in Utah it would be 900-1000 a month and we are only paying 620 a month and I wish I would have looked around a bit more because there are town homes for sale for 620 a month and you own them so whatever you do look around before settling on anything! I hope this helps and I really hope you move here we could have allot of fun! CRAFTS, antique shopping the works ha ha!

He is so cute! My kids would freak out when they got put on that paper too. I tell ya babies are smart!!

I love Dr. Nye too!! He's like a big kid...I know him from working pediatrics in the hospital. Is Hayden shrieking in your ear yet...I think I'm partially deaf!!

4 months, really? Wow, seems like yesterday you were just announcing your pregnancy! He sure is adorable!

Megan, your boy is the cutest! That little hat is to die for! Love it, it is crazy how fast they grow huh? Your family is just darling...

I love those pictures! He's such a handsome guy :) I hope we get a boy one day! Looks like we've headed down the girl path though! haha

wow I can't believe he is 4 months already! That went by so fast! He is so cute!!!